GUYS AND DOLLS
Callbacks in Progress 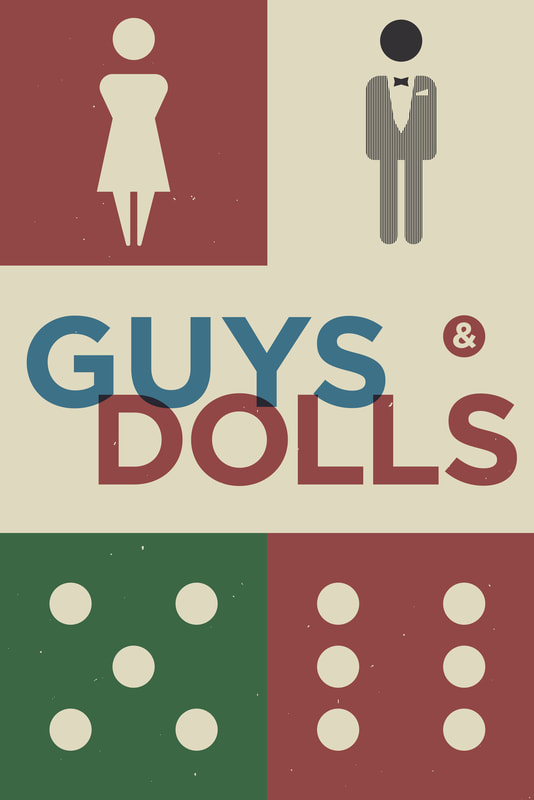 We are holding auditions for Sierra Stages' summer production, Guys and Dolls, by Frank Loesser, Jo Swerling, and Abe Burrows. Set in 1930s New York, gamblers and evangelists roll the dice on love and life in this iconic American musical. Overflowing with songbook classics such as Lucky be a Lady, If I Were a Bell, and Sit Down, You’re Rocking the Boat, Guys and Dolls is a rollicking celebration of mismatched lovers and small-time hucksters.
AUDITION DETAILS:
Callbacks in Progress - please scroll for CALL BACK MATERIALS
​Callbacks are by invite only. Final casting decisions will be announced the week of January 23rd.

Location: Rehearsal Space; 828 W. Main ST, Grass Valley, CA 95945
Please reach out to auditions@sierrastages.org
​if you couldn't make the first round of auditions or have any questions.
PRODUCTION DETAILS:
Directed by Jeffrey Mason
Musical Direction by Susan Mason
Choreography by Christi Colombo

Rehearsals begin April 2023
Runs July 13TH - August 5TH at the Nevada Theatre
All roles are unpaid
NOTES ON THE CHARACTERS:
AUDITIONS ARE OPEN; NON-TRADITIONAL CASTING PRACTICES WILL BE FOLLOWED FOR ALL ROLES.

Sky Masterson: Smooth and sophisticated, the ultimate cool guy and a  gambler’s gambler, always intent on the game and looking for the next bet. Yet even though he assures Nathan that “dolls” are easy to find, there’s something  about Sarah that he just can’t resist, and late in the show, we see that he’s willing to  sacrifice his reputation in order to help her.

Sarah Brown: She’s sincere about her religious mission, but even the wayward  among us still need to like her. She’s truly looking for the man she describes in “I’ll Know,” but over the course of the action, she follows her heart, in spite of herself, to fall in love with Sky. And as we see in the Havana scene, she has the potential to  let go and have some fun! So there’s a passionate woman inside the determined  missionary.

Nathan Detroit: A man beset on all sides—mainly gamblers eager for his  floating crap game and, of course, the persistent Adelaide—so he has moments  when he carries the weight of the world on his shoulders, but he never loses his  sense of humor. If he believed in God, we’d see him raising his eyes to heaven and  asking, “Why me?”

Miss Adelaide: Absolutely the only woman in her circle who would stay with the  same man for fourteen years and aspire to marry him. She loves performing at the  Hot Box, but she still dreams of a little home in the country with Nathan and at  least five small children. She’s tough, but she has a wonderful sense of humor  about her situation.

Arvide Abernathy: He’s a sweet, kindly man, but he’s streetwise, too. Late in  the show, he tells Sky that if he doesn’t keep his promise to bring twelve sinners to  the mission, he’ll tell the whole town that Sky is “a dirty welcher.” He probably  grew up in a rough neighborhood but wandered into a church one day and never  left.

Nicely-Nicely Johnson: He’s the classic funny guy, and only he has the  imagination and audacity to pull off “Sit Down, You’re Rockin’ the Boat.”

Big Jule: He’s the only gambler who’s packing a gun, the closest thing to a  genuine mobster. Since he’s from Chicago, he probably knew Al Capone before  that gentleman was sent to the joint.

Lieutenant Brannigan: He’s seen everything the New York streets try to throw  at him, but he remains determined to bring miscreants to justice. He knows that. Nathan and the boys keep outsmarting him, but he persists. He’s not a buffoon;  rather, he’s a streetwise cop who plays the game on his own terms.

General Matilda Cartwright: Totally committed to her religious mission, but a  very strong personality who won’t back down before anyone. She is not the least  bit intimidated by the gamblers; she’s seen worse!

All other gamblers: See the note above about the style of the show. We’re  hoping that each gambler will develop a distinct flair and personality.

Hot Box “dolls”: Brassy, vulgar and unashamed. Work it! (And be sure to see  the note in the section above this list of characters.)

Mission Band: We’ll explore these folks in rehearsal, but for now, they are  sincere in their mission work but not blind to the street life that surrounds them.
CALL BACK AUDITION MATERIALS

​{Sheet music, MP3s & Sides are downloadable at the bottom of this page.}

Before you come to the call-back…For scene readings, do carry and refer to the script pages—no need to memorize.  For songs, you may carry the music if you wish, but memorized songs are always better.

SONG ASSIGNMENTS - Youtube links are in red.
The following are character song assignments. These are in addition to the "Follow the Fold" and "Oldest Established" assignments mentioned above. You may use the links on this page to download the vocal part (PDF file) and the piano accompaniment (MP3 file) for each song.

What do we expect in call-backs?  In the songs, we want to hear your very best singing, but we also want to see you bring the character to life through your interpretation.  In the scenes, make bold choices and be sure to play off of each other.  Have fun!

What about the style of the show? We want every moment to be honest and committed, so you should fully believe in whatever your character is doing, but this is definitely a comic piece, so we’ll play the scenes broadly, sometimes verging on vaudeville.  If you remember the 1990 feature film Dick Tracy, that should give you a good idea of the strong “flavor” of our characters.

Should you sing and speak in some sort of New York accent? If you think you can pull it off, go ahead and try it, but don’t sacrifice acting values and especially good singing.  The only one who should not speak in any New York accent at this point is Sarah Brown.

What about women called back as gamblers? We are considering casting a small number of woman to play gamblers.  Each gambler character will still be a man; that is, we’re not imagining that the gambler cohort in this story included cross-dressing women.  In numbers like “Oldest Established” and “Luck Be a Lady,” such women would sing down in the male vocal range, so probably the tenor part.

Do the Hot Box “dolls” appear only in the Hot Box numbers? Absolutely not—they will definitely be included in “Sit Down, You’re Rockin’ the Boat,” “Runyonland” and any other scenes depicting various Broadway moments, and in those scenes, wearing their versions of street clothes.  Also, we haven’t yet decided how to stage the “Havana” scene, which could include one or more dancers who might be selected from the Hot Box cohort.
SHEET MUSIC

If you have any questions, please contact us at auditions@sierrastages.org or call us at 530.346.3210.
Production Photos on the Sierra Stages website are by David Wong (photographybydavidwong.com) and Heidi Grass (heidigrass.com)
Sierra Stages
PO Box 709, Nevada City, CA 95959
info@sierrastages.org
​530.346.3210